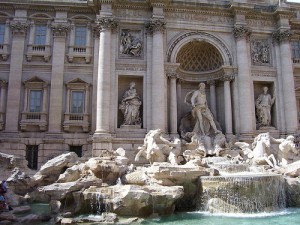 Rome Cruise from Civitavecchia cruise port sail around the Western Mediterranean Sea to Spain and France, and cruise around Italy to the Eastern Mediterranean Sea to the Greek Isles, Turkey, Croatia, and the Holy Lands. A popular Mediterranean Rome cruise itinerary is to sail along Italy’s ports of call on a Rome to Venice cruise. With a focus on the Italian peninsula the cruise may visit Florence, Cinque Terre, and Positano on the Italian Riviera all north of Rome and south of Rome the cruise will sail to Naples, the Amalfi Coast, and Sicily before making a turn around the boot and up the Adriatic sea to Venice.

FREE on board cash with every Rome cruise

PLUS – on select cruises from Rome receive: 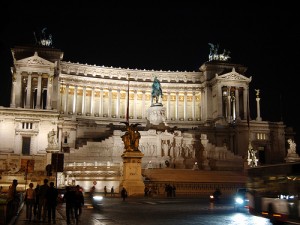 For Rome Cruise itinerary click right column to see cruises from Rome by month. In addition to on board credits ItalyCruise.us offers exclusive amenities on many Rome cruise itinerary. 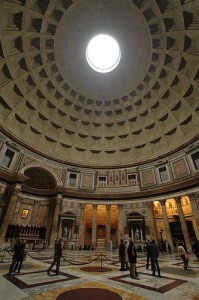 Civitavecchia to Rome by Train: Train to Rome is a convenient way to visit Rome’s center while a cruise ship is in port at Civitavecchia.

Rail service from Civitavecchia to central Rome departs every half hour, and takes about 70 to 80 minutes.

Cruise ships dock at quays inside the outer wall. The quays for cruise ships are 11 (Traianea), and 12/12B/13A/13B (Antemurale Colombo). Sometimes number 25 (Commerciale) across the harbor is also utilized. Currently there are 3 cruiseship terminals, named the Bramante at pier 12, and temporary terminals at piers 11 and 25. Cruises from Civitavecchia normally use the piers adjacent to the cruise terminals.

Rome cruise travelers looking for a Mediterranean cruise or a cruise around Italy have a wide variety of cruise choices, with Rome cruise itineraries heading west to places like Sardinia, the Cote d’Azur and Barcelona, and east to the Greek islands, Istanbul, the Holy Lands, and cruises around Italy.

As its status as the Port for Rome, the City of Civitavecchia is the gateway to one of the most beautiful and culturally fascinating cities in the 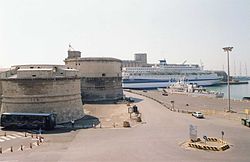 world. Most cruiseline passengers see little of the Civitavecchia in favor of taking shore excursions from Civitavecchia to Rome. But Civitavecchia itself has interesting sights deserving a visit, if you have a few hours to spend either side of your Rome cruise. Wander through the city center, preferably with a map, and you will spot remains of the old city walls, Benedict XIV’s fountain, ancient buildings such as the old hospital, quaint squares and a lot of Italian life. So combine a stroll through the town with a seafront sunbathing session for a nice day around Civitavecchia before or after a Rome cruise.

Forte Michelangelo The 16th Century fortress named Forte Michelangelo towers imposingly over the port. It was commissioned by Pope Julius II and finished in 1535 by Giulano Leno. The central tower was designed by Michelangelo. Built on the remains of Roman barracks of the Imperial Fleet, the fortress is made from walls over 6 metres thick.

Civitavecchia Beach Steps from the seafront promenade, just opposite the train station, descend to a yellow sandy beach. The sea is remarkably clean and good for swimming.

La Scaglia Necropolis The La Scaglia tomb complex dates from the 6th and 5th Centuries BC. View these extensive underground workings The cool atmosphere will bring a chill to your bones.

Civitavecchia’s Archaelogical Museum This is located in an eighteenth Century building once owned by Pope Clemente XIII and constructed for the papal garrison. It is a good place for the display of artifacts mainly of Estrucan and Roman origin. 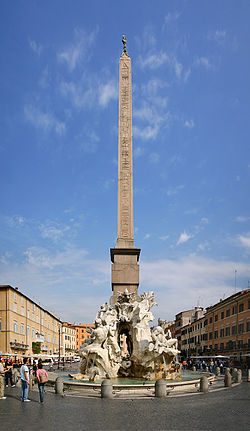 Rome is the capital of Italy and the country’s largest and most populated city and comune, with over 2.7 million residents. The city is located in the central-western portion of the Italian Peninsula, on the Tiber River within the Lazio region of Italy.

Rome’s history spans over two and a half thousand years. It was the capital city of the Roman Kingdom, the Roman Republic and the Roman Empire, which was the dominant power in Western Europe and the lands bordering the Mediterranean Sea for over seven hundred years from the 1st Century BC until the 7th Century AD. Since the 1st Century AD Rome has been the seat of the Papacy and, after the end of Byzantine domination, in the 8th century it became the capital of the Papal States, which lasted until 1870. In 1871 Rome became the capital of the Kingdom of Italy, and in 1946 that of the Italian Republic.

After the Middle-Ages, Rome was ruled by popes such as Alexander VI and Leo X, who transformed the city into one of the major centers of the Italian Renaissance, along with Florence. The current-day version of St Peter’s Basilica was built and the Sistine Chapel was painted by Michelangelo. Famous artists and architects, such as Bramante, Bernini and Raphael resided for some time in Rome, contributing to its Renaissance and Baroque architecture.

In 2007 Rome was the 11th-most-visited city in the world, 3rd most visited in the European Union, and the most popular tourist attraction in Italy. The city is one of Europe’s and the world’s most successful city brands, both in terms of reputation and assets. Its historic centre is listed by UNESCO as a World Heritage Site. Monuments and museums such as the Vatican Museums and the Colosseum are amongst the world’s 50 most visited tourist destinations – the Vatican Museums receiving 4.2 million tourists and the Colosseum receiving 4 million tourists every year.

Passengers booked on a Rome cruise from Civitavecchia usually fly in to the Leonardo da Vinci Rome Fiumicino airport.

From Fiumicino to Civitavecchia is about an hour by car, or two hours by rail. If you’ve not booked the transfer at the same time as your Rome cruise vacation, the following options are available:

Taxi to Civitavecchia A taxi ride from Leonardo da Vinci Fiumicino Airport to the Port of Civitavecchia costs around 150 euros one way. Taxis are available outside the arrivals terminal. It’s a good idea to only use registered cabs (white cars with a taximeter).

Train to Civitavecchia Catch the train from the Leonardo da Vinci Fiumicino Airport to the Rome Termini train station. The journey takes about 30 minutes. Make sure you validate/punch your ticket before boarding the train. Then take the train to Civitavecchia cruise port – see below From Rome Center to Cruise Terminal.

The Port is a ten minute walk from Civitavecchia train station. Turn right as you leave the station, and follow the road that parallels the sea front. Frequent signs confirm you are going the correct way. When you reach the entrance to the port, adjacent to the Michelangelo fort, you will find a bus stop. Here buses run to the actual cruise terminals/piers. Click for more Italy travel package ideas or for Italy video click Italy travel guide.

To learn more about a specific cruise around Italy from Rome, email Italian Tourism Italy Cruise experts or call 800-227-1577 to speak directly with an Italy cruise expert.